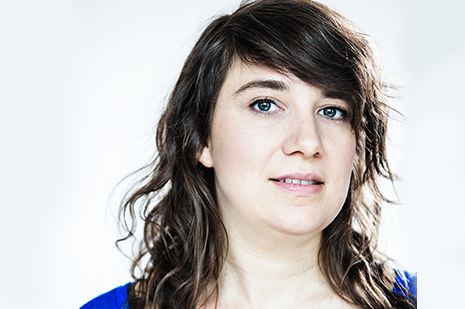 Marie Béland graduated in 2003 with a bachelor’s degree in contemporary dance creation. She then founded her company, MARIBÉ-SORS DE CE CORPS, to support her choreographic work. At the same time creator, project leader and collaborator, she began her trajectory by researching a singular gestural signature. This approach was quickly replaced by the creation of experimental and performative works, with the intention of questioning the fabrication of performance, the commonplace reflexes in dance creation and the artifices of the stage. At the dawn of the 2010’s, she opened a new chapter in her work by paying close attention to the choreography produced by our bodies in the process of speaking, a state she describes as “body-speak”. Her practice has led her to collaborate with some of Montreal’s leading performers, including Anne Thériault, Marilyne St-Sauveur, Simon-Xavier Lefebvre, Rachel Harris, Peter Trosztmer, Andrew Turner, to name but a few. She also collaborated on theatrical, musical and multidisciplinary productions.

For the past 20 years, Marie has distinguished herself through works that invite reflection from both young and general publics, and that have been presented in theaters, festivals, private and public spaces in Quebec, Canada, Europe and Africa. Drawing from our different uses of the body and the gestures that make up our daily lives, Marie organizes banal movement to make it danceable and complex. The stage acts to reveal the troubled zones of fiction inverting the true, the false and the plausible. Her creations approach live performance as a social and aesthetic phenomenon, an opportunity to study the transformations that our ordinary bodies undergo in contact with the stage. She is currently working on a new creation that addresses sisterhood through cyclical ritual practices.

Marie is also a co-founder of La 2e Porte à Gauche (2003-2018), and is publishing her master’s thesis in 2019 entitled Cartographie de la scène: les forces en jeu dans le spectacle vivant, which seeks to question the object of performance and understand its workings. She is, as well, a member of the EDCM faculty, and acts as a lecturer at UQÀM.

The company maribé – sors de ce corps is a member of Circuit-Est centre chorégraphique and is represented by Art Circulation.